The works of Leevi Madetoja (February 17, 1887 – October 6, 1947) are a blend of the seriousness characteristic of the Finns and an elegance assimilated from French music. In style Madetoja may be classified as a Romantic, but instead of the outlandish effects of the Late Romantics his music often has a Classical clarity, a wealth of nuance and stability. His main works are his three symphonies and other orchestral works, and his two operas, the first of which, The Ostrobothnians, has acquired the status of Finland’s national opera. Madetoja was also a notable composer of choral music. 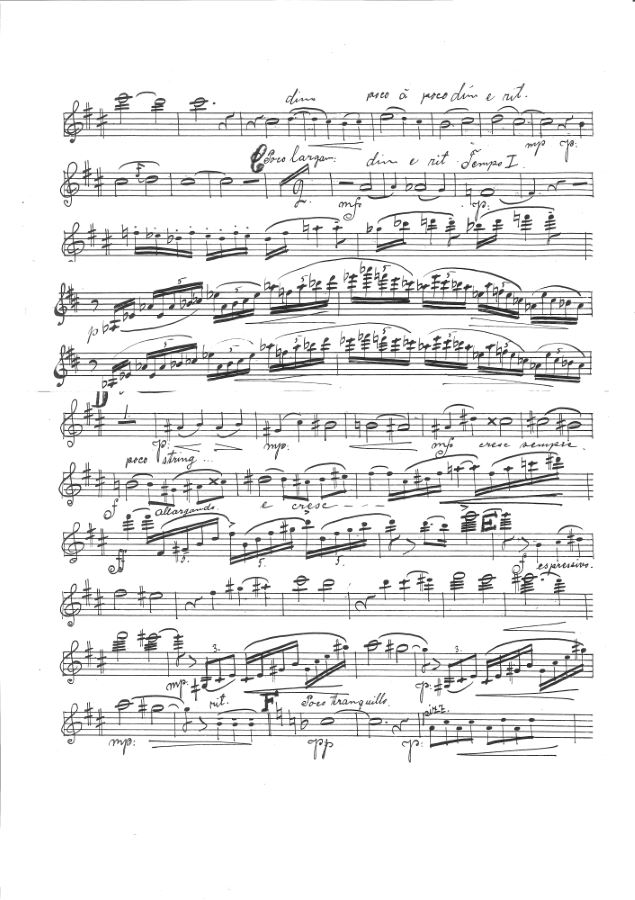 The Symphonic Suite is the earliest orchestral work by Leevi Madetoja. The best known of its four movements is the Elegy, (1909) written a year before the others, radiating a melodic melancholy reminiscent of Tchaikovsky. The other movements are more independent stylistically and more genuinely Madetojan. The three movements lyrical in tone (Elegy, Nocturne and Pastorale) are followed by a fastmoving, rhythmically lively Finale. The Elegy is scored for string orchestra, the other movements for a normal symphony orchestra. 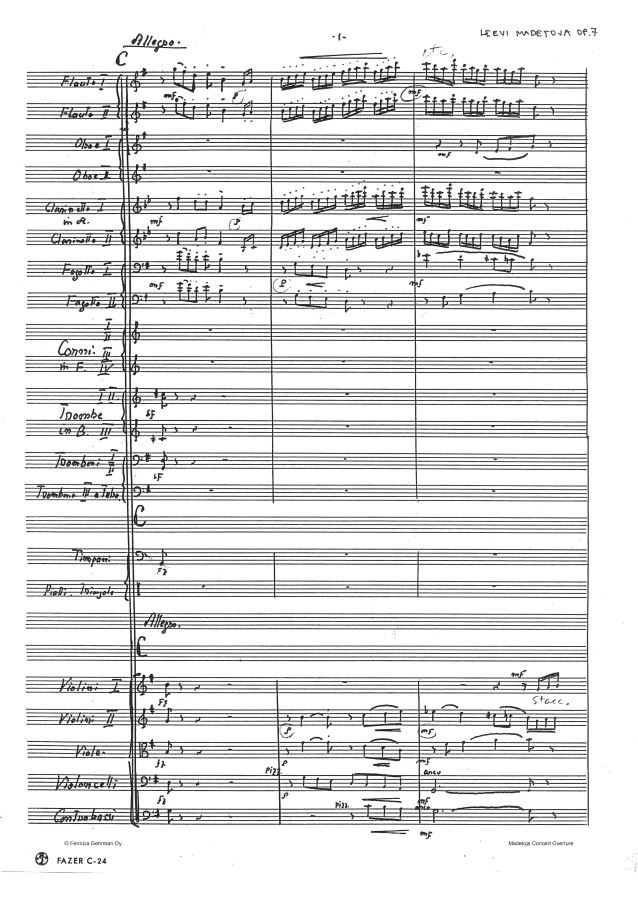 The Concert Overture was completed in March 1911 during the first year Madetoja spent studying abroad in Paris. He drew major influences from French music and culture, as can be seen from the clear, airy scoring of many of his orchestral works and more generally from the elegance of his expression. This side of his output is reflected in the Concert Overture in light, easy-going idiom. 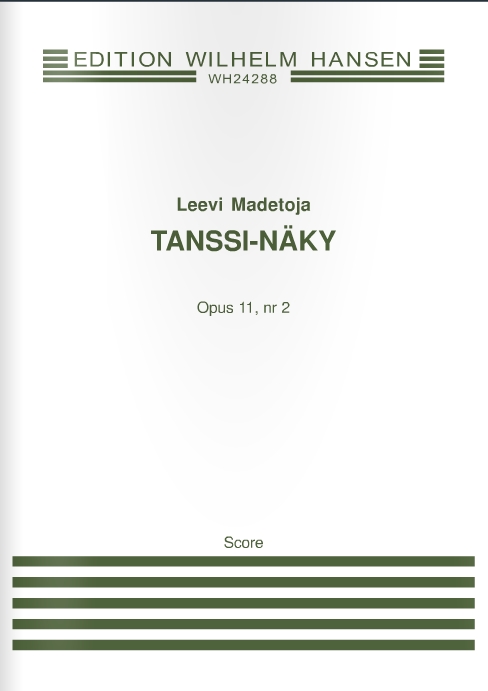 Dance Vision, originally titled Öinen karkelokuva (Night Revels), was composed during Madetoja’s second year studying abroad, in Vienna in autumn 1911. There are signs of Viennese influence in the waltz rhythms, but otherwise the work tends more to reflect the moods of the previous year spent in Paris. Dance Vision is not exactly impressionistic, but there is an impressionistic air to the orchestral timbres, the fragmentary melodies and at times the harmonies (parallel triads, augmented triads). 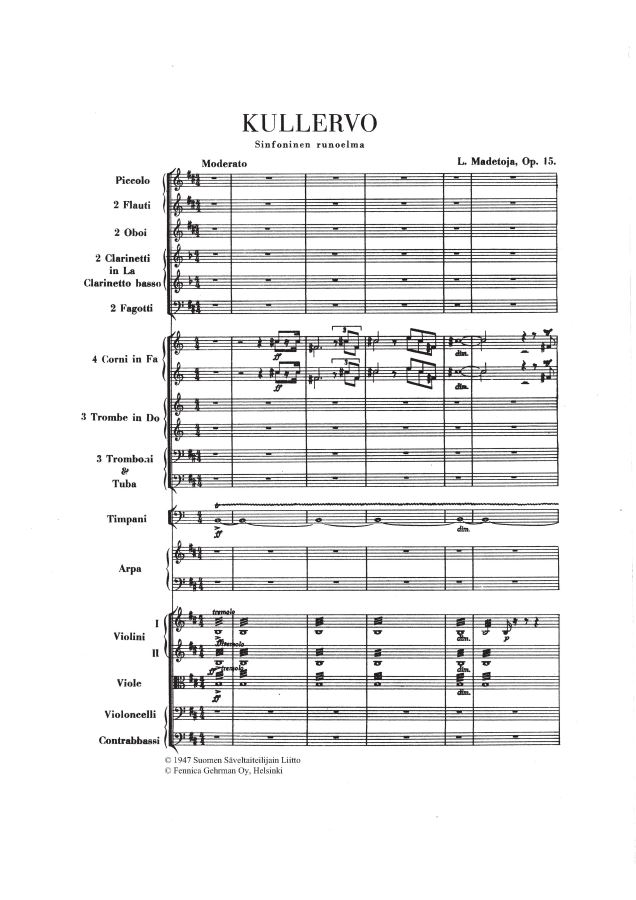 The symphonic poem Kullervo (also known as the Kullervo Overture) is the only work by Madetoja inspired by the national epic, the Kalevala. Madetoja was the fourth composer (after Filip von Schantz, Robert Kajanus and Jean Sibelius) to choose the tragic hero from the Kalevala as the subject for an orchestral work, but he could not have been familiar with Sibelius’s Kullervo while composing his own work because Sibelius had withdrawn it. Kullervo is Madetoja’s most romantic, defiant and rhetorical work and the listener can sense the presence of Tchaikovsky in particular. The turbulent drama is offset by broad melody and at times even lyricism. 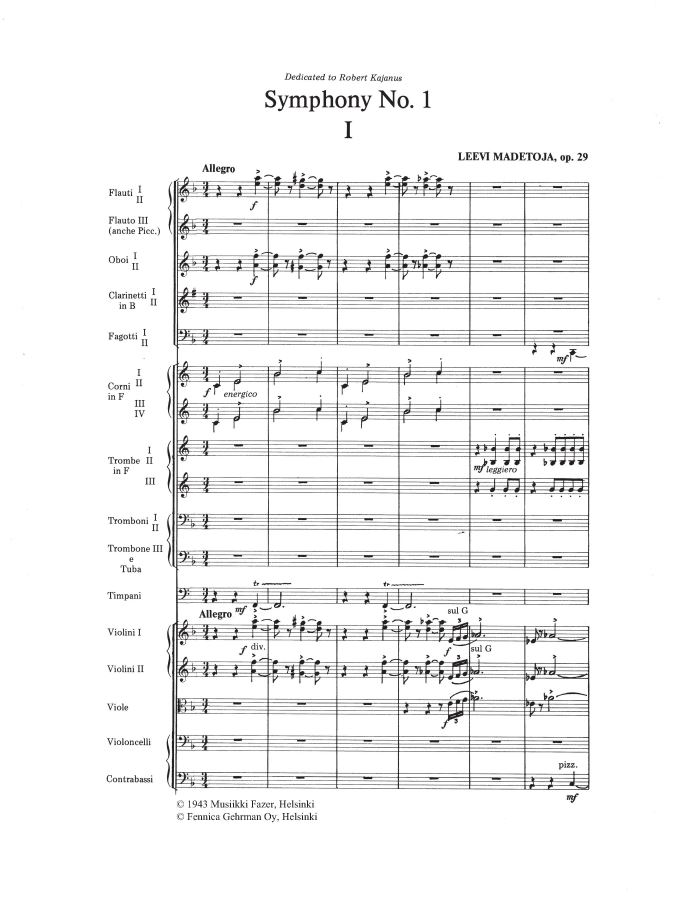 The three symphonies are the main item in Madetoja’s orchestral output. The first is the shortest, having only three movements, and it is also the most restrained and concise. A similar feeling of harmony prevails in the orchestration. For a debut symphony it is in fact well-balanced and coherent, devoid of any sense of a great personal reckoning, and despite some of its Romantic models (above all Tchaikovsky and Sibelius), its music has a certain Classical streak. 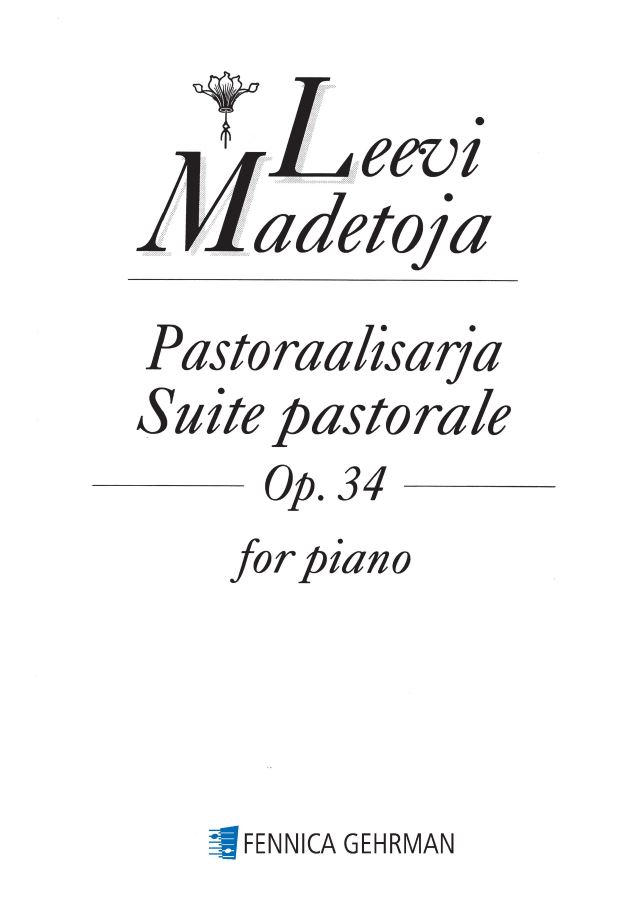 The Pastoral Suite was originally composed as a piano work in 1916, but in 1931 Madetoja produced an orchestral version of it. It is cast on a smaller scale than the symphonies and overture-type works and comes closer in nature to salon music. The movements are Morning, to some extent emanating the influence of Grieg, a lively Caprice, a Legend dominated by the static, melancholy mood typical of Madetoja, and a Waltz marked at times by unpredictable rhythms. 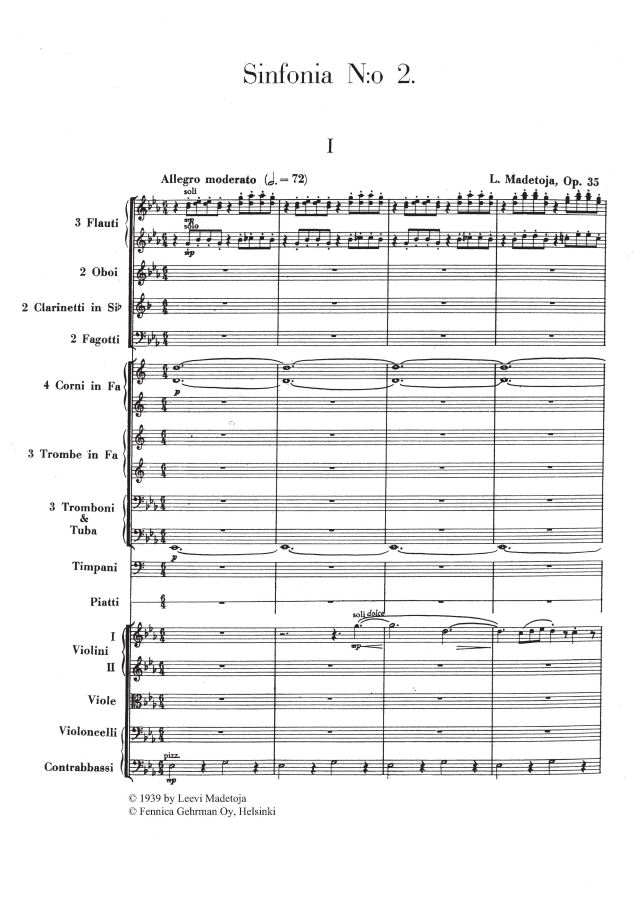 The premiere of the second symphony finally established Madetoja’s status in Finnish music. It marked a considerable advance on his first symphony, and it is the most theatrical, weighty and romantic of the three Madetoja symphonies. It has four movements, the first two and the last two being performed without a break. The moods of the first two are, with the exception of a few climaxes ominous in tone, for the most part lyrical and even pastoral. The focal point of the symphony is the third movement driven at times to violent outbursts and featuring aggressive military march elements that speak of the tragic Finnish Civil War of 1918. The closing movement is a short epilogue in a mood of resignation.

The earlier of the two operas by Madetoja, The Ostrobothnians op. 45 (1918—1923), is one of the cornerstones of the Finnish repertoire and was raised to the status of Finland’s national opera not long after its premiere. The orchestral suite of music from the opera is also popular. The opening movement, The Plain, paints a musical picture of a broad northern landscape. The main theme of the Prisoner’s Song is a folk melody Tuuli se taivutti koivun larvan, the signature theme of the whole opera. The mood of Häjyt depicting the evil village women is tense. The bittersweet fourth movement leads without a break to the closing village dance in which a solo fiddle plays a polska melody from the dance scene in the opera.

The two dominant features of Madetoja’s music are Finnish melancholy and an elegance indicative of French influence. The Comedy Overture clearly represents the latter, though it is possibly equally justified to speak of the elegance of, say, Richard Strauss’s Till Eulenspiegel or Rosenkavalier. The work is airily orchestrated and flows along uninhibited by great drama. Despite its seeming innocuousness it is one of the most coherent and most delightful works Madetoja ever wrote. 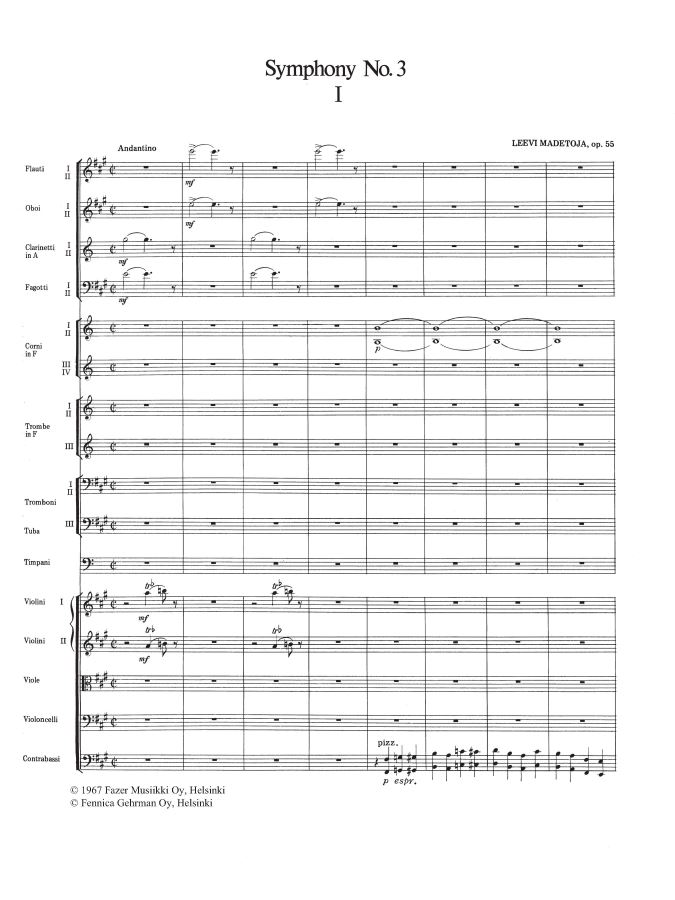 The third and last symphony by Madetoja is his orchestral masterpiece. Compared with the theatrical second symphony it is refined and well-proportioned and reflects his predilection for French culture; he began writing the symphony in France in 1925. It is characterised by translucent orchestration rich in colour and counterpoint that flows along with ease, delicately suspended somewhere between light and shade. The French elegance is contrasted by a slow movement in melancholy Finnish mood. The rhythms are richest in the last two movements. The main section of the last movement in swinging waltz tempo is written in an even metre and the divisions into two and three are at times superimposed. 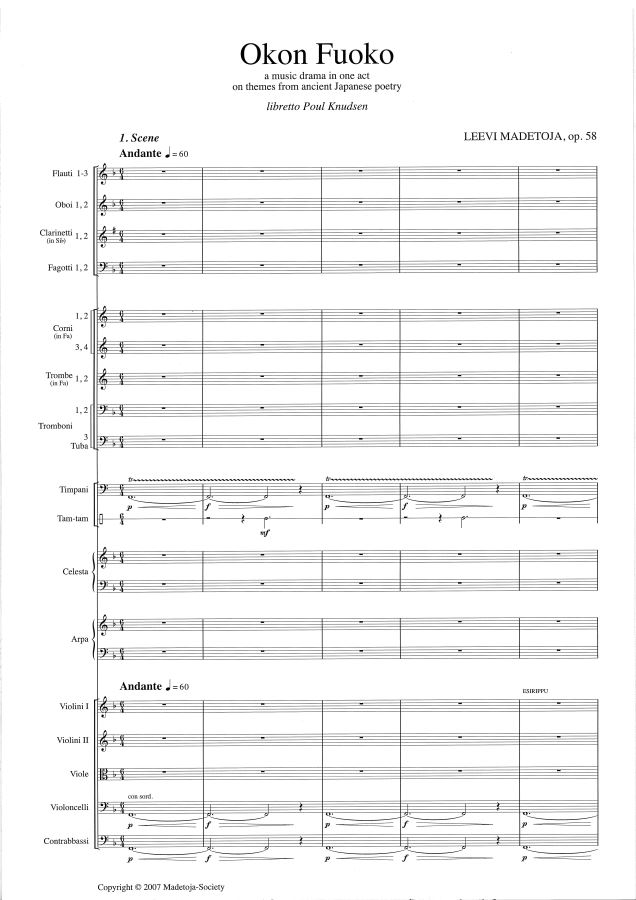 The ballet pantomime Okon Fuoko is one of the finest works by Madetoja – not so much the original stage work, which suffered from problems of dramatic construction, as the concise orchestral suite made from it. In the clear orchestration rich in nuance Madetoja creates an oriental atmosphere without resorting to the superficial exoticism afforded by the Japanese theme. In places the music comes close to the Neoclassicism of the 1920s, while nevertheless retaining a voice of its own. The suite consists of six movements played without a break. The Neoclassical overtones are particularly strong in the two movements with a regular, throbbing beat, the Man’s dance evocative of Prokofiev and the exotic closing Danse grotesque, which in places features superimposed 7/8 and 3/4 time signatures.